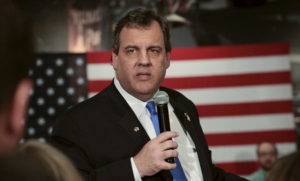 A federal jury found two of New Jersey Gov. Chris Christie’s (R) former aides guilty of all charges in the Bridgegate scandal that has continued to plague the governor.

Bill Baroni, who served as Christie’s top official at the Port Authority of New York and New Jersey, and Bridget Anne Kelly, who was the governor’s deputy chief of staff, faced seven counts of conspiracy, fraud and related charges. The most serious charges carry a maximum of up to 20 years in prison.

The trouble started on Sept. 9, 2013, when three of the access lanes were shut down on the George Washington Bridge connecting Manhattan to Fort Lee, New Jersey. It’s the busiest bridge in the country. The change created significant problems on the New Jersey side of the bridge and was ordered without notifying police, emergency officials or officials on the New York side of the Port Authority’s leadership.

Christie officials originally tried to claim that the closures were part of a traffic study ― an excuse that was soon debunked. The real motive of messing with the city’s Democratic mayor, who refused to endorse Christie’s reelection bid, was revealed shortly afterward.

The most damning piece of evidence for the political payback scheme was an Aug. 13 email sent by Kelly, when she wrote, “Time for some traffic problems in Fort Lee.” David Wildstein, a Port Authority executive and close Christie ally, replied, “Got it.”

Baroni was fully aware of what closing the lanes would do to Fort Lee. Mark Sokolich, Fort Lee’s mayor, had written to Baroni in November 2010 to complain of ongoing traffic problems.

Although Christie has not been charged with any wrongdoing, the scandal haunted him during his presidential run. And the trial brought out details that bring the incident closer to his doorstep.

David Wildstein told jurors that he and Baroni talked with Christie about shutting down the lanes during a Sept. 11 memorial service. Wildstein has been cooperating with prosecutors after pleading guilty to two counts of conspiracy.

There have long been indications that Christie may have known more than he was letting on. A top aide to Christie privately told a colleague that the governor lied at a December 2013 news conference when he said no one on his senior staff knew about the lane closures.

“And if emails are found with the subpoena or ccfg [Chris Christie for Governor] emails are uncovered in discovery if it comes to that it could be bad,” she added.