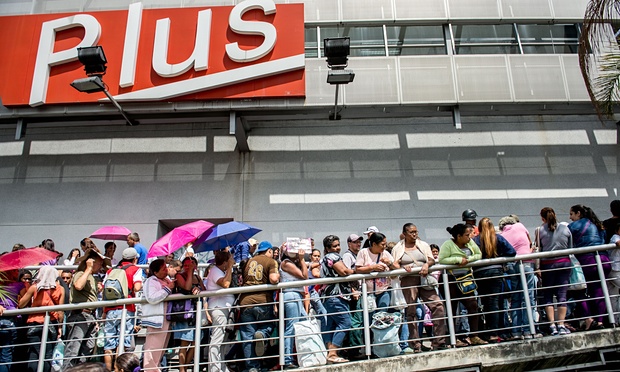 Aura Ledezma voted for the opposition in Venezuela’s parliamentary elections last week because she was sick of standing in line. But a few days after the poll, six hours into a queue to buy chicken, she wondered if things would actually change any time soon.

After Venezuelan voters gave the opposition an overwhelming victory and control of the national assembly, the 47-year-old housewife fears that a political power struggle may stifle any chance of fixing the chronic shortages, steep inflation and violent crime that led Venezuelans to punish the socialist government of President Nicolás Maduro in the elections.

“If Maduro and the opposition focus on fighting each other, we the poor are going to continue suffering,” said Ledezma as the queue for the government-run PDVal supermarket inched forward.

The line was particularly long because word had spread that the market in the 23 de Enero working-class neighbourhood had chicken and beans. “I haven’t seen a chicken in two months,” she said.

The opposition’s Democratic Unity coalition, known as MUD, won 112 of the 167 seats in the national assembly, to the government’s United Socialist party’s 55 seats, according to final results.

But the incoming majority lawmakers won’t have it easy. The country’s problems are so entrenched, and political polarization so extreme, that a showdown between the government and opposition is already taking shape.

On Friday the opposition coalition presented their legislative agenda that promised to stimulate production and supply, reverse expropriations of private businesses and tackle security issues.

It also included a law freeing political prisoners, the most prominent of whom is Leopoldo López, convicted in a highly politicized trial of inciting violence against the government in 2014 protests in which some 40 people were killed.

On the same day, the outgoing congress promoted Susana Barreiros – the judge in López’s trial – to head public defender.

Maduro had previously said he would rebuff any attempt to grant amnesty to the more than 70 opposition members facing charges for dissent.

“They can send me a thousand laws but the killers of the people have to be judged and have to pay for their crimes,” Maduro said in his weekly television appearance late on Tuesday, from the hilltop fort that holds the remains of Hugo Chávez, his predecessor and leader of Venezuela’s “Bolivarian revolution”.

“I am indignant, I feel helpless, horrible that the ungrateful people of Venezuela turned on him,” Quevedo said, her voice cracking with emotion.

She was worried that the opposition would try to overturn the benefits she says the poor have achieved under Chavista rule, including free housing, education and healthcare as part of what are known as “Bolivarian missions” which won Chávez – and initially Maduro – a loyal following.

“They are going to take everything from us,” she says.

Maduro has said he won’t let that happen. Reacting to reports that business leaders would seek to ease strict labour laws, the president said that before the new lawmakers take over he would draft a “labour stabilization” law, putting a firing freeze in effect through the rest of his term, which ends in 2018.

And he asked for the resignation of his entire cabinet to reposition the government in order to face off with the new assembly, which will be sworn in 5 January.

But behind Maduro’s public bluster may lie a more pragmatic attitude.

After a crushing electoral defeat, Maduro is facing pressure within the ruling party to defend Chavismo. But a well-connected source told the Guardian that privately Maduro seemed conciliatory and had sought to create a backchannel for conversations with the new legislative majority.

Collaboration will be needed to address some of the most pressing economic issues facing the country, such as fixing the three-tiered exchange rate regime, which has caused distortions throughout the economy. Currently there are three official rates, which range from 6.5 bolivars to the dollar to 200 bolivars to the dollar. On the streets, however, the rate is around 900 bolivars.

Francisco, a black-market changer who asked his real name not be used because his work is illegal, laughed out loud when asked to change $100. “I wouldn’t have anywhere to carry it,” he said, pointing to a large belt bag bulging with the equivalent of $40 in bolivars, whose highest denomination is B100.

Triple-digit inflation has whittled away purchasing power in bolivars: because price-controlled goods are scarce, people often seek out non-controlled alternatives at 10 times the price. A price-controlled chicken goes for 65 bolivars a pound. In private supermarkets, a pound of chicken can go for as high as 1,300 bolivars.

Even with four minimum wage earners in her family, Ledezma, the housewife, couldn’t afford that. “The minimum wage isn’t enough to buy products that aren’t regulated,” she says.

But just how high inflation might be is a matter of debate. The central bank has not published key economic data this year, but Maduro announced this week that according to government calculations inflation would be about 100% for 2015 and the economy would contract 4%. Independent analysts who have been tracking the economy in the absence of data reckon the figures could be higher.

The government has also stopped publishing official statistics on violent crime in Venezuela, which according to independent figures has the second highest murder rate in the world.

Reporter Javier Mayorca has been covering the crime beat in Caracas for the national daily El Nacional for more than 10 years. In 2005, police closed their blotters to journalists just as violent crime was spiking as part of a government effort to control information.

Now Mayorca does his best to cover the beat by hanging out at the city morgue, counting the dead and speaking to family members who come to pick up the corpses.

The sickly-sweet smell of death permeates a glass-walled waiting room, known among morgue employees as the “fish tank”, and most families prefer to wait outside for their relatives to be released.

Merly Vergara, 40, came on a recent midweek morning for the body of her brother, Deivis Vergara, who had disappeared several days before. After looking in the city’s hospitals, she found him in the central morgue – one of six homicide victims registered the night before. He’d been shot several times in the face and head.

“Kidnappings for ransom and murder have become so common that if you’re the victim of just an armed robbery, you consider yourself lucky,” says Mayorca.

For Ledezma, the housewife standing in line, the crime wave is one of the worst things about today’s Venezuela. “I don’t dare even stand in line with the money I need to buy at the market,” she said. So when she nears the front of the queue she calls a relative to bring the cash. “Otherwise I could get robbed at any moment.”

Fighting crime should be one issue both the opposition and government can agree on. But as she waits for her turn to buy chicken, Ledezma doubted they could come together even for that.

And as for fixing the economy, she said: “I think I’ll be standing in line for a long time to come.”